It’s a long time since I saw research like this (not that I’ve been actively searching). It’s all to do with how to improve the ROI on your print advertising by getting more eyeballs to your ads.

In the world of digital that’s impressions and is very easily measured. The CTR is then used to calculate your RIO. All very simple if you have the technology to back this up – which web browsers are very adept at doing.

However, the punter tanking a glance at a printed page – thats a minefield in terms of research. It’s almost impossible to link the cursory glance (or more) at an advert and a sale. So the best practice is to give your advert the best possible chance of being seen and read.

The people over at market research agency Validators came up with some really interesting research on this. And, as all hope has not yet gone and there are people still advertising in print, I thought it would be interesting to summarise their findings.

Their research was based on eye tracking studies – literally following eye movements to see where it stops and focuses on more (and less). These types studies have been used for a good few years in the Directory business as the on page/in copy marketing is massively important.

Anyway, they reported that the four biggest influencers to having your press ad gain more impact were

While some of these will seem glaringly obvious, there are some that are different and interesting

I suppose if you thought about that one long enough you’d have come to the same conclusion. Headlines are one of the first ports of call on a news page and an ad positioned beside that is bound to get some of the residual traffic.

However the researchers suggest that:

Now that’s a bit of intrusion. You could second guess a page designer as to where a headline is going to appear – but that’s the extent of it. You can’t have a situation where you have presubscribed layouts in the majority of cases. I had an amazing conversation with an ‘agency type’ person once. I was running a promotion for them in a national paper and the belligerently asked at one point what stories were going to be on the page the promotion was running on… They didn’t get the answer. 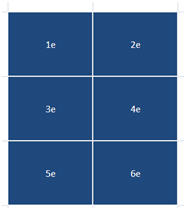 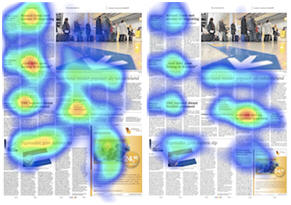 Now this is interesting. They split the page into six segments and measured the traffic going to each segment.  The bottom right was the segment that attracts the first attention, measured in seconds I should be noted. 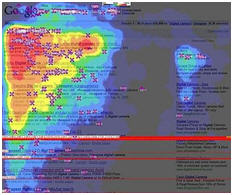 Big ads have much more effect than smaller one’s

Every Dublin Midfielder knows that size matters – but the research but some numbers on that.

So pages with only one ad have a less reading time than once with ‘clutter’, which would depart for the conventional wisdom