The Island of Ireland report for the National newspapers ABC’s was released covering the period January to June 2017.

Looking at the overall picture, the market for National newspapers has fallen by 8.2% over the last twelve months.

The biggest faller, in copy terms, in the Sunday market was the Sunday World falling 19,400 (-11.9%) on the previous year. This is followed by the Sunday Independent falling by 14,000 to 185,000 (-7.1%). They kept their bulk figure steady at around 12,000 copies; however, their drop in retail sales means that their actively purchased figure falls marginally. They had 2,000 subscribers to their digital offering in the first half  of 2017 (not included in the print figure). 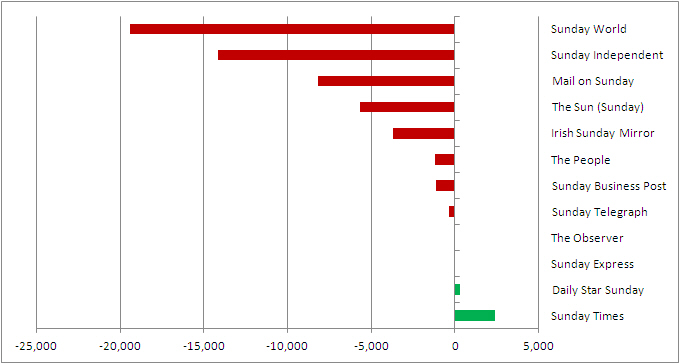 The Sunday Business Post manages to hold the decline to 4% to leave them at 30,200. Within that figure is 1,800 of multiple copies. They also have a certificate for 1,100 digital subscriptions for the first six months.

In the tabloid market, there were varying degrees of success/failure. The Sunday Mirror was one of the big fallers in the Sunday market down 14% year on year to 23,000. Its stablemate, The Sunday People, also fell dropping by 12% to 8,600.

The Daily Star Sunday actually managed to put on 300 copies year on year on the back of zero promotion for the title throughout the year.

The Sun on Sunday dropped 10% during the year to leave them at 52,000. However, their figure for the first half of 2016 got a serious lift from a half price promotion during the Euros so the first half 2017 figure was always going to look poor in comparison.

The Mail on Sunday is down 10% to 75,144 which means that it falls behind the Sunday Times in terms of circulation for the first time in a few years. The Sunday Times are showing an increase of 3% year on year to 79,833.

However, that bountiful increase warrants more scrutiny – over the first six months of 2017, they have used their multiple copy sales facility which they didn’t in the first half of 2016 so it’s not really comparing like with like. Much of the increase in the 2017 figure can be attributed to the multiples as opposed to retail sales.

A big faller in the morning market was the Irish Times dropping 9,500 copies or 13%. This includes bulks to the tune of 12%. They do have 15,000 digital subscribers which is a very healthy increase on the 9,800 they had at the same period last year. There is most likely an element of cannibalisation in the print figure where some of the declines in print have probably been replaced by an uptake in digital. 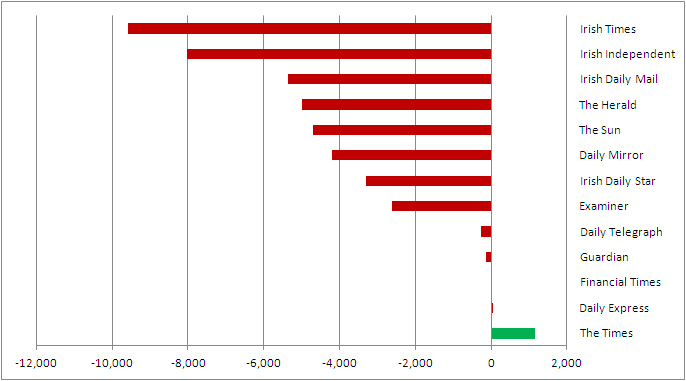 The Irish Independent had an average sale of 94,500 down 8,000 or 7.8% on last year. They had around 18% bulks within that figure which is a marginal increase on last year. Digital subscribers were 1,900 for the first half of the year.

The Daily Mail fell 11% to 41,000 and The Times are showing a pretty impressive increase of 44% year on year. Again, like its sister Sunday, the use of multiple copies which were not used in the Jan June figure last year account for that dramatic swing.

In the overview, the figure for the morning market, in the copy and the chart, does not include The Herald. It’s included in the total market along with the Echo. The rationale is that there was also a comparison to 2012 in that section when The Herald was an evening newspaper. It would have completely thrown the figures had been included in one year and not in another.