Before we dive into the numerics we have to reacquaint ourselves with some of the social aspects of the month gone: St Patrick’s Day, All Ireland Club Finals, Cheltenham, Easter and the 1916 Commemorations and a shutdown of primary and secondary schools for nearly three weeks (which disrupts household patterns which might knock on to purchasing behavior).

The main competition this month is usually between the tabloids fighting for those horse racing punters looking for advice. The tabloids historically threw supplement after supplement at the market and new, albeit transient, buyers were recruited for the week and regular readers strayed and purchased other titles to supplement their normal read on the back of those extra pages.

You can see that this brief affair with the horse fraternity paid dividends with the tabloids adding 6,000 collectively or an increase of 4% on February. Taken another way, one that we all understand, that increase equates to just shy of €250,000 at the till, extra, for the month for the three papers collectively.

It looks as if The Star gained the most numerically – but on a year on year basis The Sun is the real winner up 6% on the year and breaking back into the 60‘s – which will drop back again in April I’d imagine. You can see from the graphic below that The Sun, of late, is having a bit of a resurgence and since December are bucking the trend in the market.

The Mirror didn’t really capitalise on the month only adding 900 to their numbers. You can see for the graphic that The Sun, of late, are having a bit of a resurgence.

The Sundays don’t see much from Cheltenham and never have so their figures normally remain unaffected by the festival and the only notables would be The People and the Sunday Times. The People, finally, after months of effort and a caviller attitude to marketing (aka no marketing effort), broke into four digits.

The Sunday Times lost 3,000 or 4% on the month possibly recruited by The Mail on Sunday who gained nearly as much on the month. 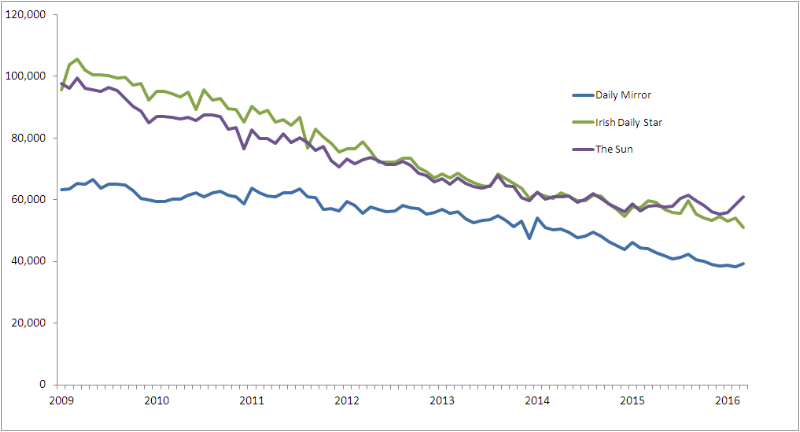