Turning our attention to the capital now, we see that radio listenership is up 26,000 on the previous year or 2.5% and now stands at 81%. Considering that radio listening in the city declined every survey from 2011Q1 until  2014Q1, it’s a healthy trend survey of late showing a growing audience for radio.

On a year on year basis the accolades go to Today FM up 18,000 (22%) and Newstalk up 20,000 (+13%). The other stations turned in some decent rises as well and the only fallers were Q102 and 4FM. The tables and graphic below spare me the laborious commentary!

Book on book it’s not all in positive territory with Newstalk, Q102 and 98FM losing some ground since the last book and Radio 1, Spin, FM014 and Sunshine the only stations to record an increase on 15Q1.

RTE1 is still dominant in the capital with a 30% reach and a 117,000 lead on its nearest rival FM014. The fight for second place looked like a close run thing last time out with Newstalk only 10,000 listeners behind FM014 for the second slot (bragging rights only really). This gap has now widened to 18,000 in this survey due to a Newstalk decline and an increase in FM104 listenership.

Today FM are probably disappointed not to have capitalised on the momentum they were experiencing in Dublin in the last few surveys. They made no reach gains on the previous book leaving them perched at 99,000 again. It’s back to 2009Q4 we’d have to go to see Today FM above 100,000 in the city.

2FM, like with its national picture, would seemed to have applied the brakes to the Dublin decline turning the corner since it hit a low point in 2012Q4 and dropping to 62,000 listeners in the metropolis. The gains have been marginal but positive in the main. Below are historical and pictorial representations of the reach of the stations in Dublin.

I added to the Dublin Figures – there was some interesting chatter in excluding the Nationals and simply looking at the Locals. I have no choice but to restrict the listings to FM104, 98FM, Q102 and Spin – the adage of ‘work fills the time allotted’ springs to mind!

So, below are the programmes compared to their previous year, all fairly pedestrian. The ‘#’ column shows the rank of each programme amongst the others in the table. The table is sortable as well 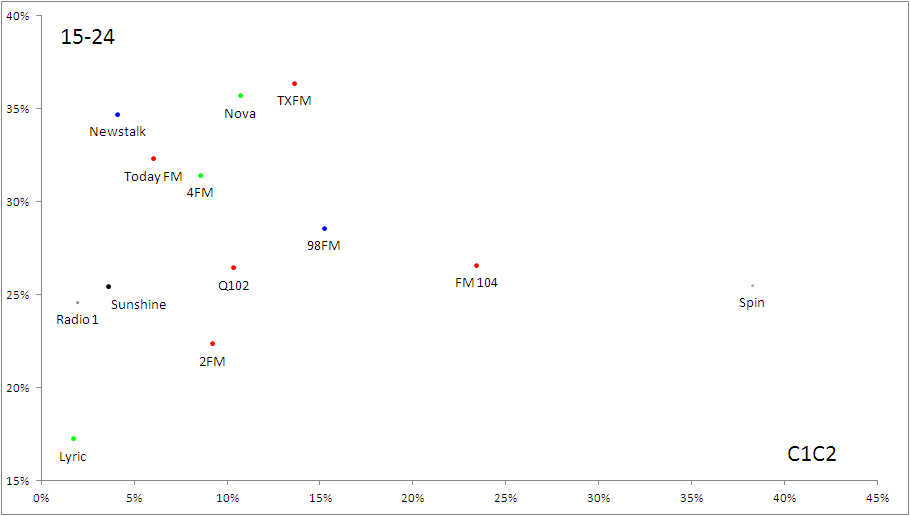 Shares show that RTE1 have largest share in the capital. Year on Year RTE1 and 98FM have made share ground with Q102 and FM104 being on the other end of that spectrum. Book on Book again RTE1 added 1.5% (points) and Sunshine and FM104 made ground as well whereas Q102, Lyric and 98FM lost out on some share against the previous survey.

Note: Nova is included here in the Dublin figures. Nova’s franchise is “Dublin Commuter” where they reach 71,000 listeners and 6%.