Listenership in the capital now stands at 81% or 826,000 people and this is the fourth successive survey where radio in the city has been more popular than in the previous survey. Of the thirteen stations surveyed in Dublin, a sizeable eight stations are showing a double digit growth between 2014Q4 and 2013Q3 in Dublin.

Similar to the national picture, Newstalk has lead the charge increasing its listenership in the capital by a massive 33% (42,000) to 170,000 and a 17% reach. It’s now only a mere 17,000 listeners for the bragging rights of second place in Dublin as detailed in the graph here. 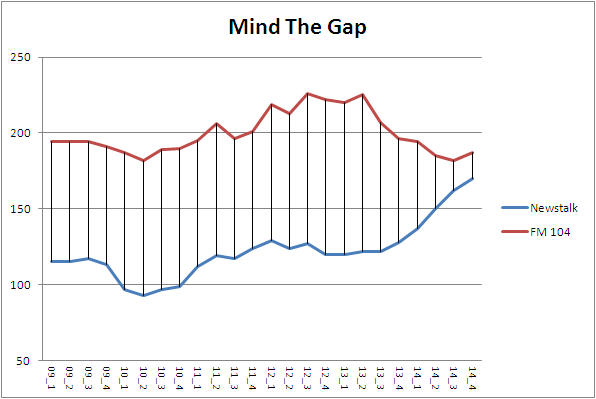 FM104 was the only station with a fall in numbers dropping marginally to 187,000. But on a book on book basis the station did manage to increase listenership by 5,000 listeners. Actually, book on book all the Dublin stations made gains.

Today FM and 2FM struggle in the Big Smoke and have done for some time. They are disproportionally represented in Dublin in comparison to other stations and the population demographic as a whole. At the same time it could also be argued that Newstalk is losing sight of the country relatives and would need to spend some time cultivating that relationship.

Nothing to see here folks… Just that Radio 1 lost two and a half points year on year, Newstalk gained 1.5% points and 98FM added 1.1% points. The rest I’ll leave to the causal observer.

In the graphic below Radio 1 has to be removed from the graphic so that we can see a little more clearly what’s going on.

Finally let’s see how the Dublin stations (Ex-Radio1) fair through the day. From the first tab you can see that Newstalk makes massive gains in the morning dominating FM104 for much of it. However, come midday the Dubliners abandon the station in their droves and don’t make a return until much later in the evening.

It’s a similar picture with Today FM where the old reliable “Iano” entertains the Dubliners in the morning which sling shots somewhat through to midday – and then mass desertion! Matt Cooper drags a few in from 4:30 but the station is down to around 8,000 for most of the afternoon.