The Institute published its twelve country report earlier last week, I re-hashed some of the interesting points and leaned a little on the Irish aspects. It doesn’t do their report any justice and you can see the full report here.

In terms of our sources of news 83% of the Irish population say that they sourced news online in the past week and that includes social media. Actually eight other countries also maintain that their primary source was online and the other four ranking online second. In those countries TV ranked first as the primary source (UK, GER, FRA, JAP) and it could be something to do with a strong and historic national broadcaster in those countries.

Within that 83% of online as a source for Ireland, 49% is specifically from social media. So, close to half the population uses social media as a source of news – not necessarily their primary (see below). This compares to 64% in Brazil and 21% in Japan using social as a source.

The biggest ‘tail off’ would be in Print going from a 49% source to a 7% primary source. It’s understandable given the ‘static’ nature of the product – but it also throws up where that medium lies in the news sphere. It’s a source but not a primary one – therefore should it’s online edition be the primary and the printed edition be the a supplementary product?

As an average 12% of the Irish population access a news source (any) five times a day or more but 15% of us access it less than once a day. The report states that the more technology you have at your disposal i.e. desktop, smartphone, tablet the more likely you are to access news.

They delved into ‘trust in media’ – 68% of Finns say they trusted their media compared to 34% in Spain and 32% in USA. We ranked #7 our of the twelve countries with 46% of us trusting our Media.

An interesting statistic was the dual screen usage. In the survey, over half the respondents said that while the TV was on at home they were otherwise distracted. Checking email 43%, browsing the web 42% and 27% checking social media. But it wasn’t all digital: 53% said that they were distracted doing domestic tasks and 22% were reading newspapers/magazines.

Paying for the Pleasure

We rank third out of the twelve countries paying for a printed newspaper in the past week with 54% of the populous parting with hard currency for a printed news product every week. Given the sales of newspaper in Ireland in the 90’s, for example, one might surmise that there was, at one point, a very healthy interest in print. One might also make the mental leap that with the decline in the printed product that consumers might have transitioned to a paid online model – but no!

While we are the third highest in terms of paying for a printed product on a weekly basis we are the third worst spenders on online news content – with only 7% of the population paining for online news. (This is defined as a digital subscription, combined digital/print subscription, or one-off payment for an article or app). Of that small portion who subscribe to an online news service – 63% paid for a one off service, possibly an app payment and 31% have an ongoing relationship with a publisher.

So, we’d happily cough up for the printed product, but simply can’t make that leap to a digital offering of the same product. If there’s anything a traditional publisher wanted to take away from the report it’s probably that fact – and something that Irish publishers are going to have to overcome if they are to survive. And the fact that the general population value the physical product and don’t value or are prepared to pay for the digital product, I feel lies squarely at the feet of traditional publishers. They have completely devalued their online offering and the only currency for it is “free”.

But even the future looks bleak – with only 13% of the population saying that they would be prepared to pay for online news in the future! Have a look at the responses from the UK which make for very worrying reading for local publishers there. 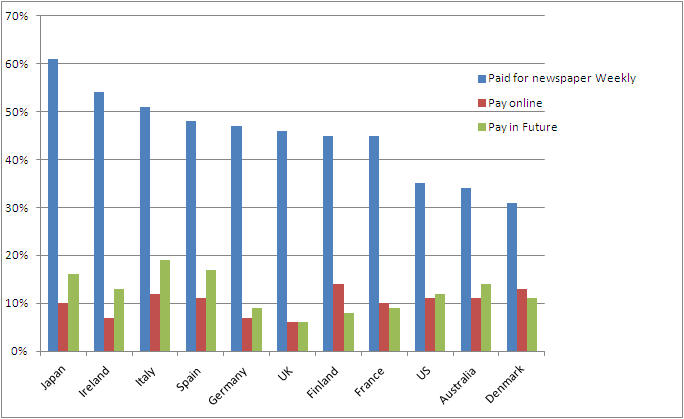 As an aside: The Sun have come our from behind their paywall, more or less. They’ve decided to allow more stories free on site – driven in part by their ‘shares’ on social media. In the survey, 30% of the UK population said that they had, in the past year, made a one off payment to The Sun and 16% had made an ongoing payment to the paper. One would have thought that those levels of subscription were enough to keep the paywall – but obviously not.

The primary device for accessing news is a PC with 74% of the Irish population using the desktop to view news content. Actually the PC dominates in all the countries under scrutiny followed by the smartphone and then tablets – in varying degrees by country.

Australia gave the PC a bit of a run for its money with 67% of the population accessing news on a PC during the week followed by 59% on a smartphone. In Ireland the numbers were: PC 74%, Smartphone 52% and Tablet 22%. One the other end of the scale Japan stuck rigidly to the desktop at 78% followed by some way back was the smartphone at 33% and tablet at 13%.

But that’s any access, 57% of the Irish population still considered the desktop as their main source of accessing the news – their “go to” device for want of a better word for keeping informed. This is followed by 32% for the smartphone and only 7% for the smartphone.

Interestingly on a mobile device the mobile browser is the main source of access for news – as opposed to a dedicated app. Likewise on the tablet, the access is very much a browser based access with only a small amount opting for a news app on a tablet.

In Ireland 26% of us use a smartphone app to access news on a weekly basis, suggesting the 74% use the native mobile browser and 6% used a app on a tablet to access news. Can we, for the purpose of news consumption, consider the app a dying/dead facility and that the browser is the de facto way to source news on mobile devices.

The survey results maintain that on a smartphone we limit our sources, there is a tendency to have only one or two sources of news that we use. When we sit in front of a desktop we tend for be a bit more enthusiastic in our range with 37% of us having only once source (as opposed to 44% having once source on a smartphone and 45% on a tablet)

Route to the News

Finally and interesting statistic on the route to the news: We tend to use a search engine as our source to news – but that’s highly deceptive. Over half of the respondents used the keyword of a newsbrand to get them to the website via the search engine results.It sounds implausible that people use that route, but a quick look at the Google Keyword planner shows me that the phrase “Irish Independent” is searched, on average, 1.2m times a month.

Other used a keyword from a (known) news story and then selected a site from the search engine results. Of those who use search 57% say that they click on the headline that’s most interesting to them. 33% click on the content from a site they know and trust.

In only three countries did the respondents go directly to the newsbrand.