The Sunday Independent dropped below two hundred thousand to land on 199,000 and even 12,000 bulks couldn’t save them. They lost 14,000 over the year or 6.7% slightly above the overall Sunday Market decline.

They further widened the gap between themselves and nearest rival, the Sunday World who had a bad first half dropping 15,000copies (unfortunate top spot accolade for that decline) over the year. It fell just shy of 9% of a decline but was eclipsed by the percentage falls of the Mirror and People.

The Sunday Business Post, although falling 1,134 copies, did do the “least worst” as it fell by 3.5%, the smallest fall in percentage terms in the Sunday Market. In that were 1,000 multiples but that’s a marginal reduction on the previous year.

The Sunday tabloids, in the main, stayed above the Sunday market fall percentage thanks mainly to the positive growth of the Sunday Sun. The Sunday Mirror and Sunday People way underperformed compared to the market and are currently falling at a double digit pace at 13% each. Those are aggressive levels of decline especially for The People who are currently at just under 10,000 copies each Sunday.

The Daily Star Sunday has all but given up on the Republic in terms of marketing, but still manages to find 15,000 customers to buy its product every Sunday.

The Sunday Sun survived the drop felt by its direct competitors through a couple of factors I’d suggest. In June they ran a promotion halving the price of the publication to €0.50 throughout the month. The result was that it added just over 9,000 copies to their sales and 26% year on year for the month. So that one off promotion came just in time to be included in the six month figure.

Before this sounds overly critical the Sunday Sun it has to be said that even if you strip back the multiples month by month from this year and compare that figure to each of the first six months in 2015 they are still ahead every month this year – bar January. So, the core product is performing better than last year.

Price promotions and multiple sales are all above board and I’m just trying to temper the inevitable copy in Friday’s paper or a press release later today where they will beat their chests astride the Empire State building and berate the rest of the publications for not growing their sales – just like they did.

And they won’t be alone in trying to spin the numbers. You can nearly be guaranteed that currently in some newsroom there’s genesis of a story, in the face of nothing really positive to say, claiming increased market share for a publication. In a rapidly declining market increased market share is akin to being in a village beset with smallpox and finding a box of Aspirin.

The Sunday Times are showing a 7% decline year on year down 5,600 on the first six months of 2015. It’s below the Sunday market decline and, again, there may be a few factors here. I’d very much like to believe that that print media still works as a marketing medium, as does radio and television. The Sunday Times have used all of those mediums very heavily over the past year to try and coerce readers from the print to digital versions of their products.

They tempt the punters with iPad minis and reduced costs on the print version in order to try and get them to migrate online. You’d like to think that their huge marketing efforts are being rewarded and that people were taking to the digital platform on the back of those efforts.

The Sunday Times has an ABC cert for their “Tablet Edition” from June of this year which shows ‘active views’ of 95,000 on average for the month. That would be a worldwide figure and it’s not further broken down unfortunately.

I believe that within that 95,000, a few of those have to be in Ireland and I would contend that within the 5,600 print editions drop is a measure of migration to the digital platform – the extent of which I cannot say and not revealed in the digital certificate. I did send an email to News UK asking them if they would like forward an estimate of their digital subscribers in R.o.I. but I’m still waiting for them to reply and forces me to ponder for a bit.

Looking at it from a different angle; if ten percent of the total Sunday Times print sale is from the Republic of Ireland could we apply the same ratios to the digital figure? Probably not as the digital market is probably wider geographically than the print and the UK is ahead of the curve digitally in comparison to the rest of Europe so 10% might be disproportionate for the Republic.

Then let’s chop it in half then to say 5% originate from these shores – resulting in potentially 4,700 subscribers? It’s impossible to ascertain but what we can say, with some level of certainty, is that the 6% print decline would be reduced, or at least explained in greater detail, if their numbers for their digital products were available on a geographic breakdown and we could see the migration numerically here in Ireland.

The Mail on Sunday, still #3 in the Sunday Market, is down 7,000 on the year but their circulation fluctuates wildly at the best of times on the back of promotions. 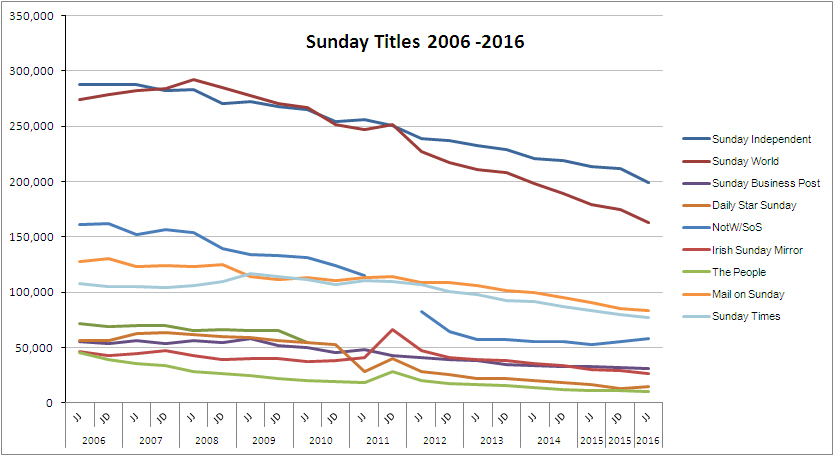 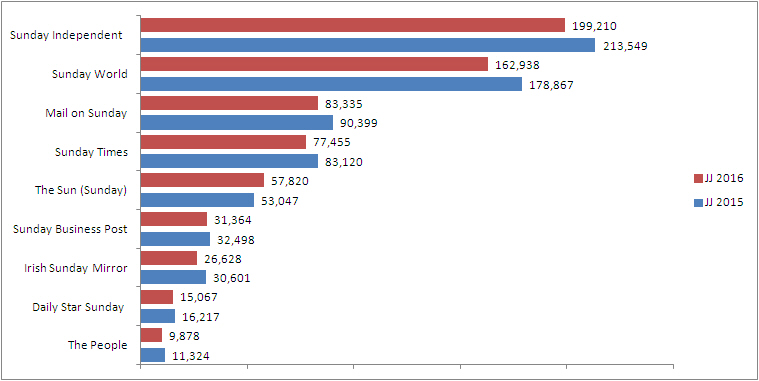