Dubliners have thirteen stations to choose from so it’s a very busy parish to be plying your trade in. Not unlike the national picture, the dominant player is RTE1 having a reach of 27% and 274,000 listeners on average every day. Their dominance has been severely eroded over the past few surveys and they are down 24,000 listeners and five percentage points over the same period last year. Actually, their high point in Dublin was at the very start of this year and they have been dropping each subsequent survey – down 17,000 on the last quarter (Q3) for example. 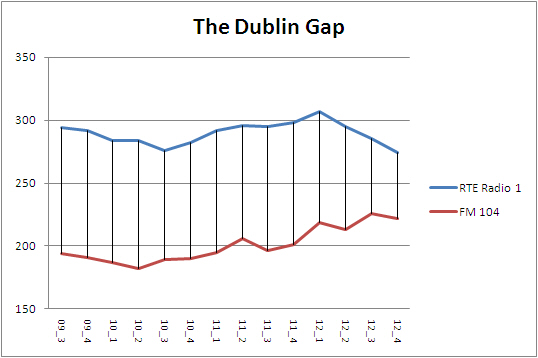 But whatever RTE1 are doing wrong in Dublin, FM104 are doing right. Over the twelve months they added 21,000 listeners bring them to 222,000 on average per day. Any stations demographics are a product of the stations output in the main. So with no disrespect to either station, I really can’t see RTE1 and FM104 being in the same ring as their offerings are so different. But the gap between them, which once stood at 102,000 listeners in 2010, is now down to mere 52,000.

Foley moves away from his midday shift with 151,000 listeners nationally, but only 25,000 listened to his programme in Dublin last time out. So, on the bright side, he has potentially doubled his audience in Dublin!

Today FM, competing strongly on a national ticket never seems to perform well in the metropolis. They lost another 11,000 listeners in the past twelve months and stand at a reach of 8% in Dublin compared to 13% nationally. There seems to be a very ‘outside the pale’ hint to their profile and it’s a profile that may not sit well with some advertisers.

As its taxpayer’s money, I feel that it’s incumbent on me to point out where some of our money is going in the form of 2FM. I though in the last survey it was making some progress in not exactly turning around the slide, but at least arresting it. This is not the case with an audience of 62,000 (17,000 off Lyric – which is a very specialist station in the Donnybrook Stable) and a reach of 6%. I don’t purport to have the answers but there seem to be, from the outside, a bit of stasis in the efforts to halt the decline.

Again graphically is probably the best way to envisage what’s been happening over the past few years. There’s enough going on in the graphs looking at only eight stations without the assault that it would be if I included all thirteen participants. 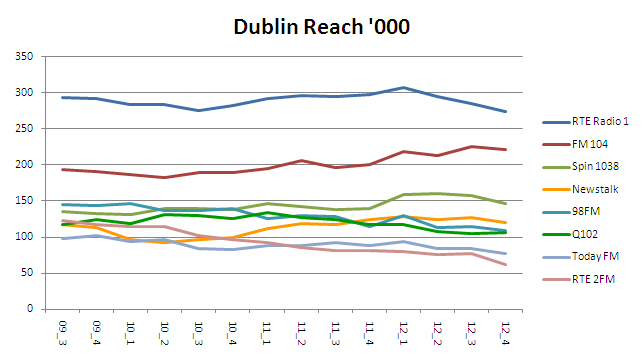 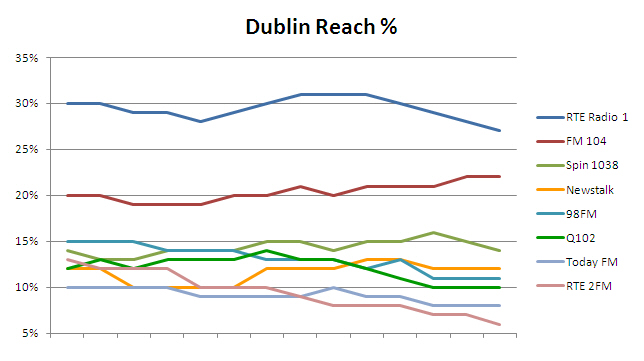 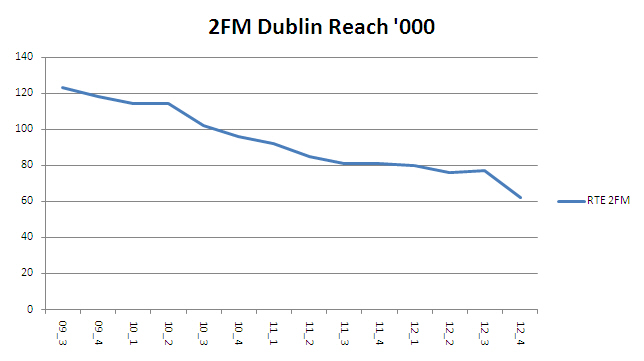 The market shares are an interesting one. I have a small graphic that best explains the dominance of RTE1 in Dublin, but then renders the underlying stations to something akin to a spaghetti type mess. So when the picture is relieved of RTE1, which has a 32.5% share in the capital, you can see something of what’s going on in Dublin a little more clearly. 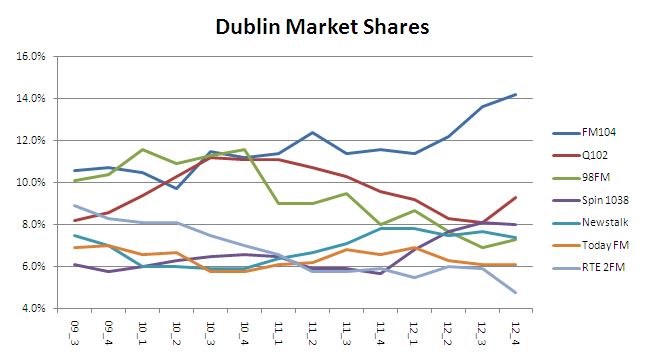 Finally a quick glance at the quarter hours reaches (sans RTE1). It shows that from 8:00am until 5:00pm the market is dominated by FM104. Its only in the evening that Mr Hook manages to wrestle away top slot. Personally I thought that Matt cooper would do better in Dublin as he is second last behind 2FM. 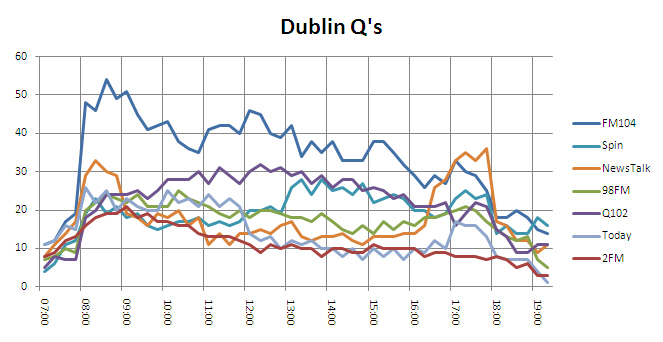